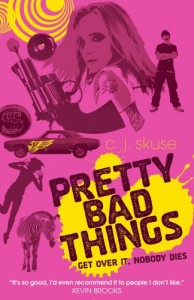 Sixteen-year old twins in Candy-Store crime spree. Twins, Paisley and Beau Argent are in the headlines again. Last time, they were the ‘wonder twins’, when as six-year-olds they were found alive in woods after three days missing following their mother’s death -three days spent looking for their dad. Now at sixteen, life’s not so wonderful. Out-cast and exploited by their money-grabbing grandmother, they’re still clueless about their dad’s whereabouts. Until they discover an old letter from him. That’s when they decide to hit the road – and make headlines again. Holding up fast-food joints might seem extreme but if they can get on the news, and tell their dad they need him, they might get the dream reunion they thought could happen.

I had really high hopes for this book.  It sounds like a fun adventure.  Unfortunately, it just didn’t work for me.  I really didn’t like either of the main characters.  Paisley was over the top bitchy and ridiculously impulsive.  Beau was spineless and annoying.  Basically the whole book was Paisley pulling them into some ludicrous  plan that Beau didn’t want to go along with, but he did because he wouldn’t say no to anyone.

The other problem I had with the book was that it was written by a British author, but set in the United States.  Anyone that knows me knows I am an Anglophile, so British wording/spelling doesn’t generally phase me, but when it comes out of supposedly American characters, it was distracting.  I read the British version of the book.  I’m interested to see if those things are changed when the American version comes out later this year.

Read as part of the British Books Challenge.